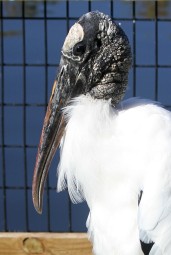 Beauty is in the eye of the beholder. 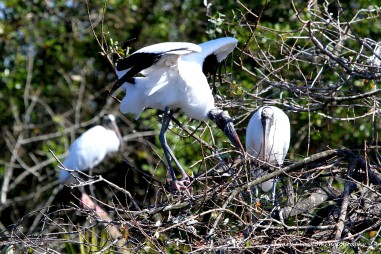 Storks collect long twigs to place into the nest. 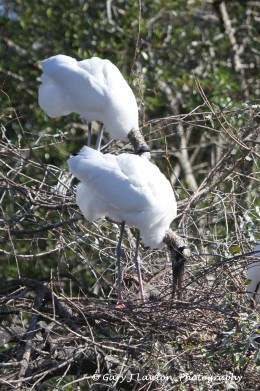 Storks build nest by weaving twigs into a network of branches. 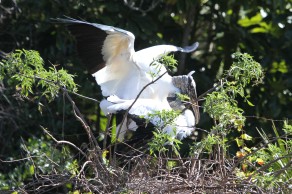 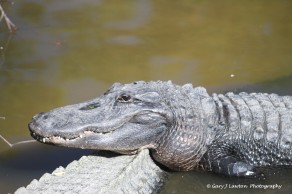 Alligators patrol the swamp keeping predators away for the wood storks.

In a cypress swamp at the headwaters of the Florida Everglades, wood storks gather in cypress trees that tower over a marsh full of alligators. It is late January and internal biological clocks triggered by the lengthening of daylight cause the storks to seek ideal places to raise this year’s families. It might seem insane to nest precariously above hungry gators, but you can blame it on evolution. American alligators are the bouncers of the swamp. They keep the tree climbing predators – raccoons, bobcats, rats and snakes – away from stork eggs and chicks.

Some say the endangered wood stork has a grotesque, pre-historic look. This is due to its dark-colored naked head and neck and a heavy downward curving bill. They are large birds – standing over three feet tall with long skinny legs. Wood storks are mostly white, but have black flight feathers and a black tail.

The storks are paired off and each couple begins to build a nest on different branches in the same tree. I observe one pair sitting on a branch that hangs over the water where hungry alligator soaks in the January sun. One adult watches as its mate pulls a twig from the tree branch and calculatingly inserts it under and around other branches forming a network of loosely placed branches forming the base of the nest. It flies off and returns with a long twig held in its bill, alights and weaves it into the lattice of branches forming the nest. On a nearby branch another nest is under construction and an adult stork flies with Spanish moss trailing in its bill, alights and drops it onto the nest.  During the nest-building phase the male stops and mates with the female. It looks awkward and clumsy as it flaps its wings to maintain balance. It is a wonder these large birds don’t fall out of the tree during their moment of passion.

I watch for some time, amazed at how agile these birds are despite their size and look forward to returning to the rookery to see the special delivery of their babies.