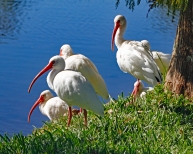 It is mid-December with blizzard conditions in the mid-west, lake effect snows in the Great Lakes and a six-inch blanket of snow on the suburban lawns of Long Island, New York. A polar vortex powers its way south into the U.S causing temperatures in the teens with highs in the 20s. Many birds have fled the icy north and are “vacationing” in Central and South America. Birds that have remained in the north are well adapted to the  adversity of the weather.

On this mid-December day, Florida refuses to participate in winter. It is sunny, 85 degrees and quite humid. White Ibis rest on the edge of a lake oblivious to the challenges of their counterparts in the north. Their only concern is to watch for gators that want to make a meal of them. It is a peaceful and relaxing scene.