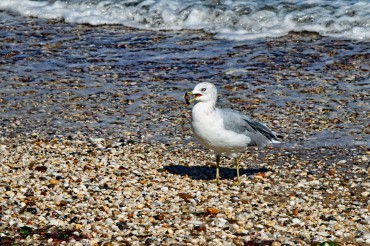 Also exploring the shore line at Sunken Meadow State Park Beach on New York’s Long Island were hundreds of ring-billed gulls. Mature ring-billed gulls have gray wings with black wing tips with spots of white, a white body and a distinctive black ring around the tip of its yellow bill.

Some gulls were scavenging the wrack for marine life to eat. Many stood at the edge of the beach where waves washed the surf often depositing snails, crabs and other salt water creatures that the gills snatched up. Others floated in the onshore breeze just above the rolling waves snatching fish from the water.

These gulls are notorious for hanging out at fast food restaurants begging for tidbits and cleaning up after people. They are also attracted garbage dumps where they rummage the piles of trash for food. These sites with the plethora of food is partly why, the ring-billed gull secure in its population.