Posted by Gary on March 27, 2015 in Reptiles and Amphibians, Wildlife 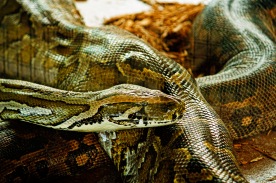 Snakes are popular house pets, especially with children. Burmese pythons are one of the many species of exotic snakes sold in pet shops. When purchased these snakes are small and manageable, but are capable of growing rapidly up to 8 feet in one year with proper care. This results in some people releasing their pets into the wild when they can no longer handle them. These non-native species compete with indigenous snakes and impact native wildlife populations.

Burmese pythons and other exotic species readily adapt to the southern Florida climate and thrive in a variety of habitats including the urban environment. Giant pythons are difficult to trap because they often lurk and wait for prey to come to them. When young, they are tree dwelling snakes that pose threats to birds and arboreal wildlife. Pythons eat everything from mice to deer to gators. Their impact to vulnerable species can be devastating.

Research to estimate the numbers of exotic snakes in the wild, identify the species of non-native snakes in the various habitats and the impact these invasive species have on natural fauna is being conducted. Although the U.S. federal government bans the import of several species of exotic snakes, there are thousands of invasive snakes in the Florida landscape now creating challenges to wildlife officials charged with protecting native birds and animals. Government officials, pet owners and the pet trade must work together to minimize the impact of exotic species in our environment.

← The Regal Florida Panther
Leaves of Three… Leave Them Be →