Posted by Gary on September 8, 2016 in Shore Birds, Wading Birds 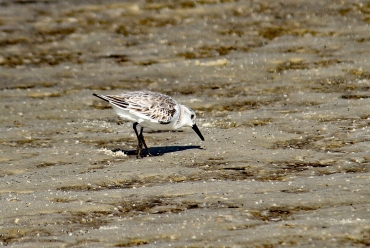 Walk along any Atlantic Coast beach and you are likely to see Sanderlings – small grayish birds with white bellies and short black legs running back and forth in the surf zone. Sanderlings sprint behind receding waves to  probe for and pluck worms, small crabs and invertebrates  from the wet sand. When the next wave crashes on the beach, these sandpipers escape the water by running up the beach out of the reach of the wave.

Sanderlings are not unique to the Atlantic Coast of North America. These sandpipers are found on every continent except Antarctica.  They wade in the shallow Gulf Coast waters of North America and probe for crustaceans on the beaches of  California’s Pacific coast. Sanderlings  hunt for insects in the Arctic tundra where they nest and eat isopods on the Pacific Islands. They dodge waves  on the African Coast and forage on Australian Beaches.

Although Sanderlings are ubiquitous and there are an estimated 700,000 of them in the world, their numbers are decreasing in many areas which is a cause of concern. More science is needed to determine population trends and causes of declines to fully understand how to prevent this species from declining.

← Bounty on the Beach!
Sunrise in Daytona →