What Hawk is That? 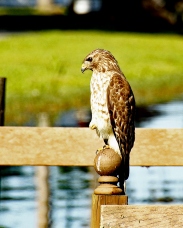 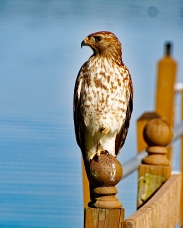 Walking along the shore of Lake Tsala Apopka on a recent spring day,  a raptor sitting on a post of a floating dock caught my eye. It was intently looking at the lawn, turning and titling its head looking for something to eat.

I was not sure what kind of hawk it was. It was a juvenile bird with indistinct markings. After showing pictures of the hawk to a friend of mine who use to band hawks during the fall migration on Fire Island in New York, she confirmed that it was a broad-winged hawk.

These hawks over winter in the northern forests of South America. This hawk was probably migrating back north to near where it was born. It hunts by surveying the ground from a perch; it will pounce on mice, lizards and other prey it sees.

It was a pleasure to see this small buteo and I hope to see others migrating through our little corner of paradise.

3 comments on “What Hawk is That?”