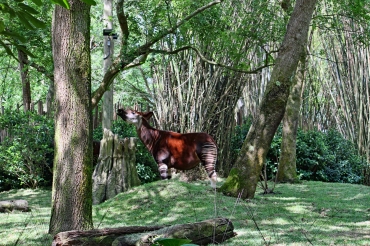 This strange animal looks like it is related to the zebra due to its striped black and white legs, but the okapi is the only living relative of the giraffe. This species lives in one area of the Democratic Republic of Congo in Africa in a dense rain forest with trees, shrubs, ferns and herbaceous plants, its main food supply. Except for leopards, okapi have few enemies. These creatures are quite shy and elusive. Its striped legs help it blend in with the tropical forest. (The photographs here were taken at the Animal Kingdom, Walt Disney World, Orlando.) The okapi population has decrease by half in the last 15 years due to deforestation from logging and settlements. Hopefully, enough of the forest where these unique species live will be preserved to sustain a healthy okapi population.

← The Nimblest Antelope!
Third Largest Penguin in the World →