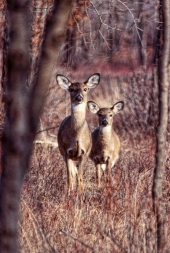 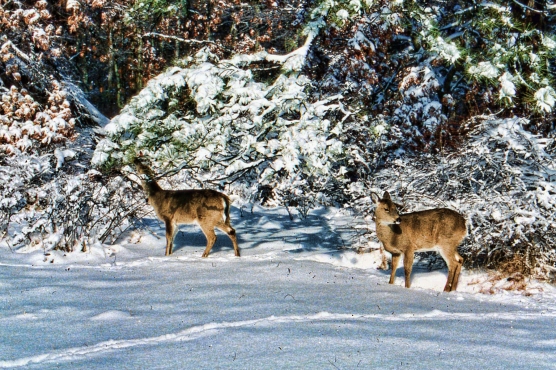 White-tailed Deer do not hibernate for the winter. They do not migrate to warmer climates. These deer weather the frigid winter temperatures and storms through adaptations that took thousands of years to develop.

One adaptation is one that all animals developed to survive the cold. In the summer and fall, when food is plentiful, deer will devour as much nourishment as they can find – acorns, tree leaves and wild grasses. This is important for building up a fat layer under their skin. That fat is different from the dangerous fat that we store. It is a brown fat that will not only keep the deer warm, but is energy rich so when resources are low in the winter, these energy reserves will enable the deer to survive through the winter.

Like many mammals, deer grow a thick coat of fur. Each hair is hollow and filled with air. This helps insulate the deer from the sub-freezing temperatures of the winter.

Another adaptation is the change of behavior of these hoofed animals. In the summer, deer rest during the heat of the day and become active in the evening, and through the night when they forage. Since winter food resources are sometimes hard to find, deer need to conserve as much energy as possible and it takes a lot of energy to stay warm. So when it is the coldest the winter deer change their behavior by being active during the day when it is warmer and bedding down at night.

Deer tend to travel together in small herds in the winter, a process called “yarding”. This is important during winter snows. By being in herds, the deer can tread through the snow one behind the other thus conserving energy. Additionally, when bedding down in the snow the herd can trample the snow together making it easier for them and again conserving energy.

← Sleeping in the Snow
What do Squirrels do in Winter? →