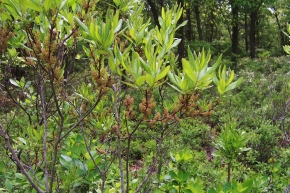 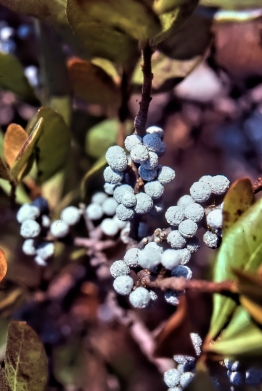 When I grew up on Long Island and visited the sea shore, I always enjoyed the fragrance of the native northern bayberry. Breaking off a leaf and crushing it in your fingers releases the bayberry scent often used in candles today. Later in the summer, the flowers turn into fruit that are green at first, then turn gray as the winter approaches.

The bayberry is adapted thrive in the salty marine environment. Everything about this plant is waxy – its leaves, its twigs, its berries. The waxy coating protects the plant from salt spray and also reduces the loss of moisture to the environment from transpiration.

Even with the waxy coatings, there is one bird that depends on the shrub’s berries. The yellow-rumped warbler eats insects during the summer, but in the winter it changes its diet to seeds – juniper berries, poison ivy berries and bay berries. It is able to digest the waxy coatings of the bayberries.

The early settlers named this plant because it grows by America’s bays and produces berries. The colonists made bayberry candles, but it was a laborious process to produce a single candle so the candles were burned just for special times such as Christmas.

This plant grows along the mid-Atlantic coast in the interdunal swales and on Long Island can be found inland in the sandy pine barrens. Check it out.

← Not Your Garden Azalea
The Soap Bush! →