Posted by Gary on September 2, 2019 in Wildflowers 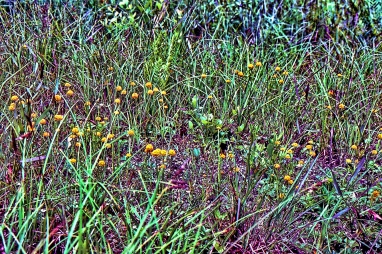 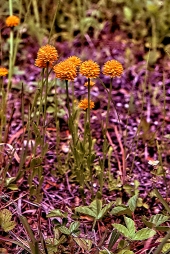 Walking through a pine barren habitat where pitch pine, oak trees and heaths dominate the landscape, I came upon a disturbed area where the sandy soils were saturated with water and sedges, rushes and grasses dominated the opening. There were dozens of orange flowers on short stems along with sundews where the vegetation was less dense. Upon closer examination, it was orange milkwort, an endangered plant in New York where it has reached its northernmost range.

This is a wildflower of the coastal plain from the Mid-Atlantic states south to Florida. It needs full sunlight to flourish so it is often found in disturbed open areas growing in wet acidic sandy soils and bogs. It is called milkwort not because it has milky sap, but folklore says that when animals eat the plant, they are able to produce more milk.

Orange milkwort is an indicator species for identifying wetlands and that is where the threat to this species exists. Although wetlands are often protected, there is still development of wetlands in some areas and that has the potential to imperil this plant. Although the plant is extremely rare in New York, will climate change change that? As it becomes warmer in the north will this plant begin to thrive? Time will tell.

← The Plant with Many Names
The Plant That Collects Frost →