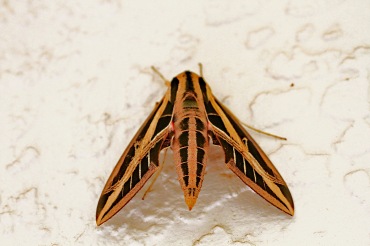 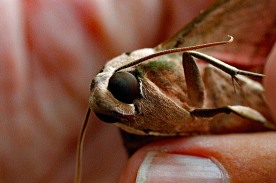 When Anne takes the mail out, she calls me from our front porch. “I know your foot hurts, but you might want to bring your camera,” she tells me. Having just injured my right foot, I hobble over to the love seat, grab my camera and painfully limp over to the front door.

To my delight, it was worth the painful trek because on the wall of our porch was one of the most striking moths I have ever seen. It was large, about 3 inches and had an eye-catching pattern with a tiny splash of deep pink on the inner edge of one of its wings. It was clinging on the wall and occasionally flicked its wings as I snapped photos of it. It was an adult banded sphinx moth.

The larvae of this species are large and striking too. These sphinx moth caterpillars eat willows, pupate underground, and emerge as adults. These moths live in tropical and sub-tropical areas in South America, Central America and in southern North America although strays have been seen as far north as Nova Scotia.

I wonder what the moth is up too. What brought it from the nearby wetlands to my front porch? It did not look old; its wings were not tattered. Throughout the night, I check on it and it has not moved from its spot. The next day I go out to see it it is still there and it is gone. Or so I thought. It fell to the ground, dead. I guess it lived out its life. I am glad Anne found it. It will live on in the internet.